At the onset of the COVID-19 pandemic in 2020, virtual experiences and online streaming were booming.
As in-person events were canceled and physical products became harder to acquire, the music industry was hit especially hard by this sudden loss of revenue.
Gigs dried up, recording sessions were put on hold and the traditional ways artists earned money through touring, merch and album sales ground to a halt.
This caused a major financial loss for many musicians, particularly local independent artists.
Changes in the music industry
Akron-area solo artist Marc Lee Shannon got a taste of the so-called “rockstar lifestyle” early in his music career as the guitarist for late Cleveland legend Michael Stanley’s backing band, The Resonators.
“Say, if I was in my 20s and I got a song on a record, I could go buy a new car. Or there was an advance from the record company, that would be significant,” Shannon said.
Working in the music industry for decades, Shannon has seen a shift.
“I grew up making records back when there was no streaming,” Shannon said.
Music fans turned to streaming services like Spotify and Apple Music out of necessity during the pandemic, yet these platforms notoriously pay artists very little.
While streaming payment rates fluctuate regularly, artists make less than a cent per stream on any given platform.
Some Northeast Ohio musicians said digital services like Bandcamp, which combine physical product with digital downloads, help recoup some revenue lost during the pandemic.
However, creativity, marketing and business skills have become necessary to make it as a full-time artist in 2022.
‘Treat it like a business’
Jeff Klemm, who performs in the band Jeff Klemm & The Letters and as a children’s musician, said it’s difficult for artists that love writing original songs to be profitable with the music industry’s ever-evolving business model.
“A lot of artists, including myself, sometimes just want to create, man,” Klemm said. “I just want to make things, you know? But it’s just so tough to do that in this day and age because, okay, cool, you’ve made all this stuff, but like, what are you doing with it? Are you playing shows? Are you getting it out? Is anybody consuming it?” 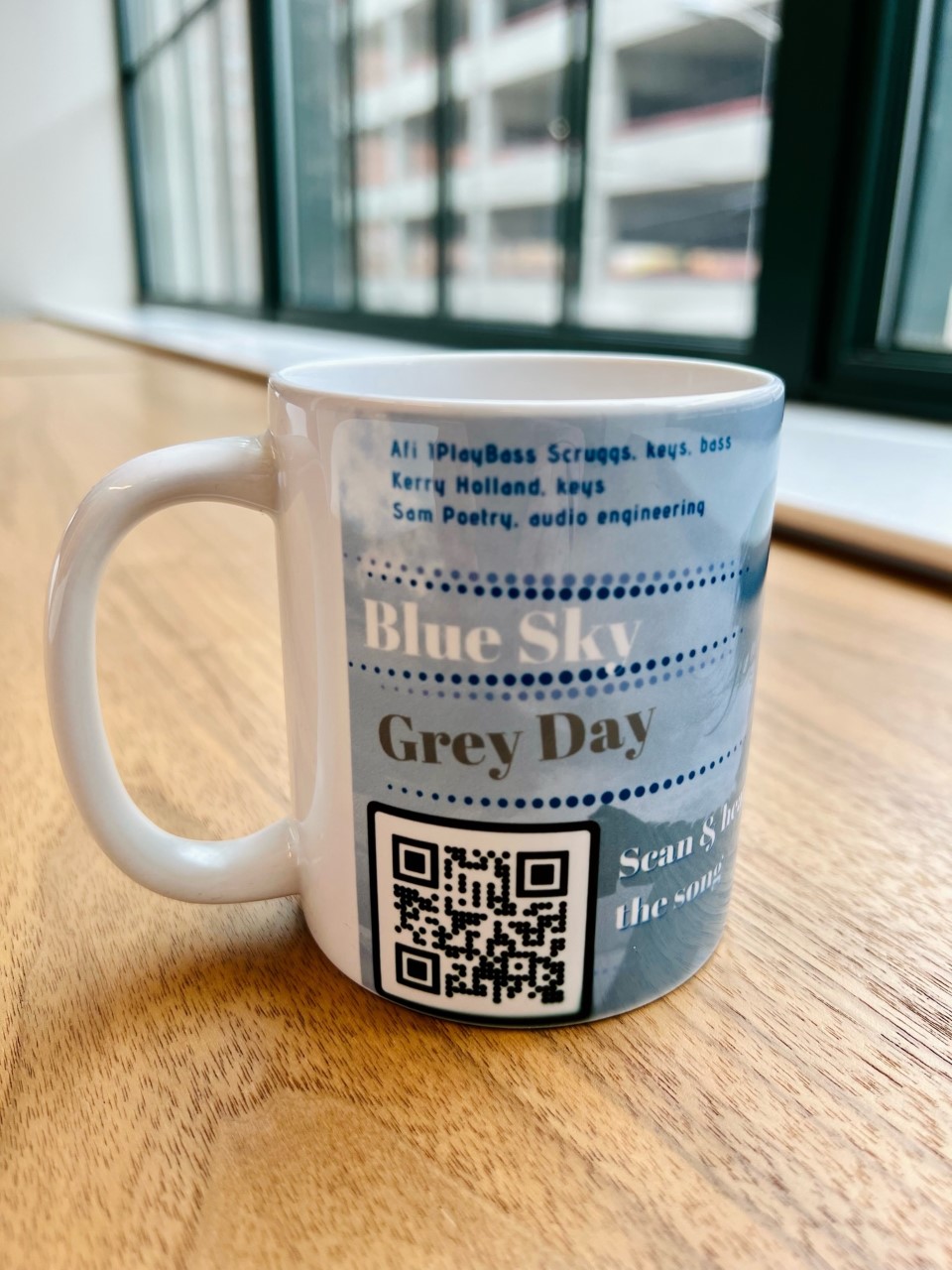 Cleveland blues bassist Afi Scruggs sells mugs printed with a QR code directing people to her Bandcamp page. She said she makes more money selling mugs as merchandise than she earns through music streaming services. [Amanda Rabinowitz /  Ideastream Public Media]
Cleveland blues bassist Afi Scruggs is in her 60s, but the longtime news reporter and writer—at one point for Ideastream—starting playing and recording music less than a decade ago.
“I went into this understanding that I am probably not going to make money selling music,” Scruggs said.
Scruggs said it’s hard to market her genre, blues, as the audience generally skews older.
Spotify’s algorithm doesn’t favor blues to get on playlists, she said, and her listeners typically are not streaming music like younger consumers are.
Getting discovered and signing to a major label isn’t necessarily the goal anymore for artists who also want complete ownership over their original music and do not want to give away a percentage of their royalties.
Klemm has learned he has to wear a lot of hats to make ends meet as a musician.
In addition to creating his own original music, he plays in a wedding band and started teaching virtual music lessons.
Klemm also gives advice to his students about marketing themselves and promoting their music.
“It’s like, OK, we’ve got to focus on this music stuff. But then you also have to focus on all this other stuff about getting yourself out there,” Klemm said. “Because somebody hears your song, you have like one chance to show them, ‘I’m this person, I do this, here’s my stuff. You can find it here, you could buy it here. If you choose to buy it or if you want to stream it, you can stream it here.’”
Like Klemm, Shannon makes a living as a full-time artist.
“Imagine your whole business as an artist had a storefront. What’s going to make people want to come through that door?”
Shannon said you can be an artist just to create, but if you want to make money, you have to treat it like a business. He has an accountant, a lawyer and someone who manages his gig schedule.
“You’ve got to have somebody that manages social media, someone to manage media and communication [and] somebody that manages the business side of your business because you have to do it or you can’t proceed,” Shannon said.
Challenges with streaming services
Shannon said music isn’t necessarily the main thing you’re selling as an artist.
“Imagine your whole business as an artist had a storefront,” he said. “What’s going to make people want to come through that door?”
Bands and solo artists are getting creative to generate income. Some, for example, are selling their own brand of scented candles or coffee.
Scruggs has started selling mugs with a QR code printed on them that takes people to her blues music online.
“I probably make more money selling one of those mugs for $20 than I would be streaming,” she said. “Because you get percentages of a penny.”
For most streaming platforms, it takes at least 100 streams to make $1. Hundreds of thousands of streams are needed to make $1,000.
While Spotify can be great for exposure through its popular curated playlists, it’s just about the worst when it comes to paying artists for their music.
To make money through Spotify, artists today have to land on the platform’s editorial playlists that get more streams and shares from listeners around the world.
This requires a submission process, in addition to having all the pieces of their marketing and branding put in place beforehand. 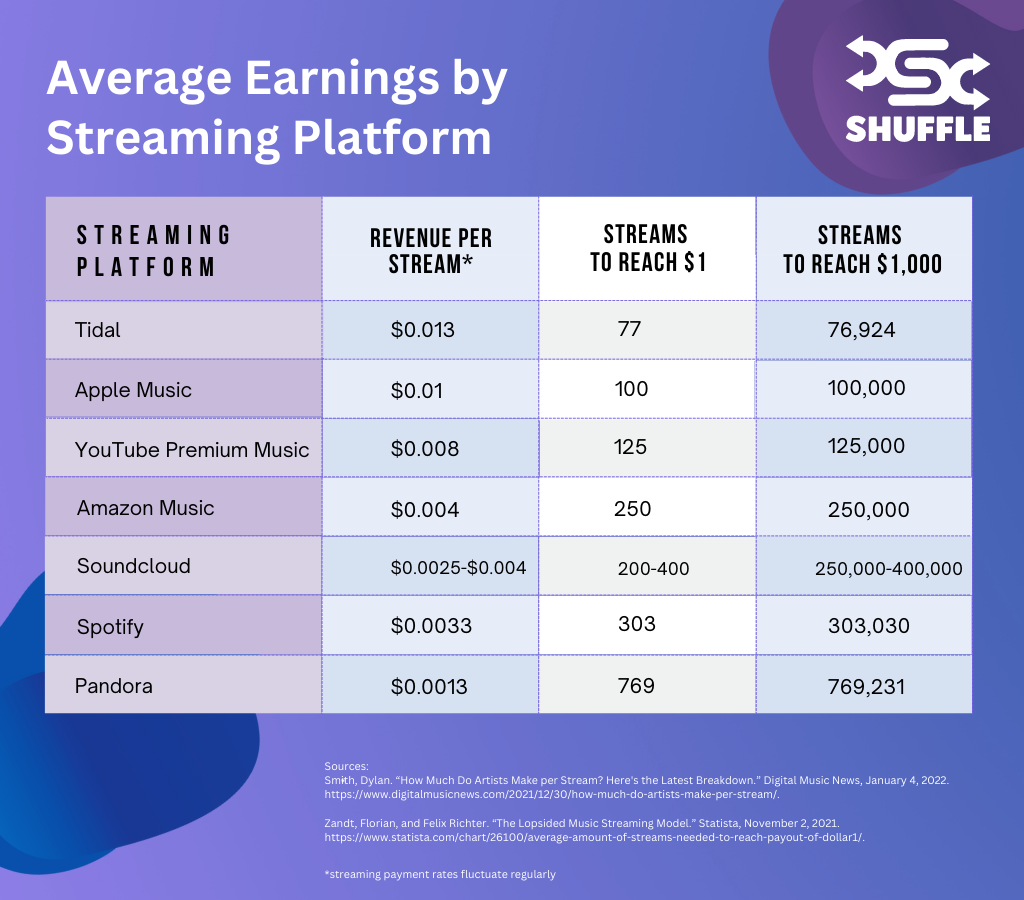 Shannon said there are other sources of revenue out there for careers in music that can pay artists much more than streaming services do.
He has found success registering his music with the nonprofit, public performance rights organization Broadcast Music, Inc. or BMI.
It pays royalties every time an artist’s song is played live, even when the artists themselves perform it.
ASCAP is another example. While music distribution services will collect mechanical royalties, BMI or ASCAP will collect performance royalties.
“I register every gig I play and go online and put in my song list, and I actually make more money doing that than I do on Spotify,” Shannon said.
Mixing online merch sales with digital music
Wes Meadows, who owns Flowerpot Records, an independent label out of Berea, said Bandcamp is the best way to support local musicians online.
It operates more like a digital record store, letting artists and labels set a “pay-what-you-want” format to sell everything from digital tracks and CDs to vinyl and T-shirts.
Bandcamp takes a 10-15% revenue share on those sales.
“Integrating an entire merch store into the place that you’re also able to stream the album is not a thing that a lot of other streaming sites do,” Meadows said.
While independent artists and bands received a lot of support in the early days of the pandemic, Meadows said they still need their fans to show support, from buying music and merch to paying to see them play live in concert. There are also other options, including Patreon.
Meadows said 2020 and 2021 were their best years for Bandcamp sales.
The label still offers exclusive content on the platform for music fans who don’t feel comfortable attending in-person shows.
Bandcamp also started Bandcamp Fridays during the pandemic, where all proceeds from sales on the platform go directly to the artist.
Meadows said this was a good gesture but ultimately not enough to sustainably support independent musicians.
“I started celebrating ‘Not Bandcamp Friday,’ the day after Bandcamp Friday,” Meadows said. “There are 30 days out of every month… There are only so many days that Bandcamp Friday exists, and artists need to eat every other day too.”
“I probably make more money selling one of those mugs for $20 than I would be streaming.”
Klemm said winter is tough for full-time musicians to earn money because concerts, festivals and events start to dry up.
He said he spends the cold-weather months working on new music.
“I’ll take less shows in the winter so I can focus on recording and preparing the next season’s original music that I’m working on,” Klemm said. “So really in the ‘winter times,’ it’s teaching a lot of music lessons for me and then focusing on what I’m going to be playing next year and what I’m going to be pushing.”
Scruggs said one positive to the digital music world is the ability to make music—you don’t have the “gatekeepers” with full creative control over an artist’s work.
Now, anyone can create music with basic software and publish it, she said.
“If I had done music earlier, I wouldn’t have been able to break through because it was a very different industry,” she said.
Scruggs said she likes being able to communicate with her followers directly through platforms like Bandcamp. It’s not the same experience as interacting with crowds during a live show, however.
Scruggs said she got some advice from a book she read: “Treat music now like the movie theater business.”
Theaters don’t make money off the movies, they make money off the concessions. Scruggs said, “What’s your popcorn?”
Support Provided By